Perspectives from Social Science and Law 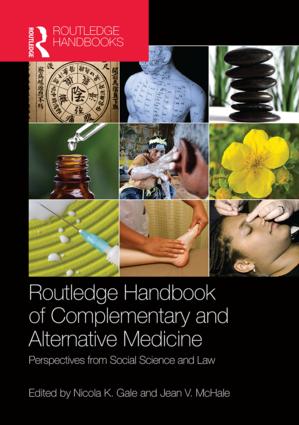 The provision and use of traditional, complementary and alternative medicine (CAM) has been growing globally over the last 40 years. As CAM develops alongside – and sometimes integrates with – conventional medicine, this handbook provides the first major overview of its regulation and professionalization from social science and legal perspectives.

The Routledge Handbook of Complementary and Alternative Medicine draws on historical and international comparative research to provide a rigorous and thematic examination of the field. It argues that many popular and policy debates are stuck in a polarized and largely asocial discourse, and that interdisciplinary social science perspectives, theorising diversity in the field, provide a much more robust evidence base for policy and practice in the field.

Excerpts from the chapter:

“Shamanism is a field of work that spans the archaic to traditional tribal settings and pluralistic Westernized societies. It is simultaneously ancient and yet, from a Western perspective, in its infancy. As it has changed over time and crossed national borders, it has enhanced and challenged individuals and cultures through art, music, dance and medicine – but it is not without controversy. As it has made its way into contemporary Western culture, it has run into professional and ethical hurdles and, more recently, safety issues, which are the subject of this chapter.”

“To begin to understand shamanism, shamanic experience and practice, it is important to first examine the complex shamanic worldview. Most commonly, the shamanic view divides the world into three or more intricate and interdependent categories or worlds that are organized in a cyclical pattern: (1) the Earth and environment, which includes plants, animals and stones; (2) the human world; and (3) the divine or cosmic world.

Each of these worlds has its own spirit component. It is through the spirit that communication and negotiation are achieved between the worlds and thus the spirit serves as the base for shamanic practice. The worldview is highly dependent on the environment and experiences of the population, which means that, as you travel to different regions, you will see a shift in creation stories and organization of the culture.”

“To explore some of the challenges facing the field of shamanism today, I have chosen three vignettes that illustrate important professional, ethical and safety issues. The first is from my practice and shows potential hazards that can affect clients on a personal level. The second, also from my practice, illustrates the broader impact on an individual and local community. The third is taken from press and court documents and demonstrates how these issues can affect the public at large and potentially society’s view of the work of shamanic practitioners.”

“A German woman in her mid-30s consulted my practice seeking guidance for a difficult encounter she had had with a shamanic practitioner. A few years previously she had sought spiritual guidance in order to help her resolve a history of childhood abuse. While reading a local esoteric magazine that promoted spiritual classes and teachers, she found a man who used the title of shaman and said he could help people retrieve their soul from traumatic situations. She made an appointment to visit him. After asking her a few questions, he announced that he could see a grey cloud over her head and if she did not sign up for his one-year training she would certainly have a brain tumor within a year. She left the meeting in a state of shock and did not return. She became highly suspicious of all shamans and yet developed a fear that she would contract a brain tumor. My meeting with her five years later showed this had not occurred.”

View profile
We use cookies to ensure that we give you the best experience on our website. Do you accept cookies?YesNoRead more